Fatwa – Masaajid Should be closed Covid 19 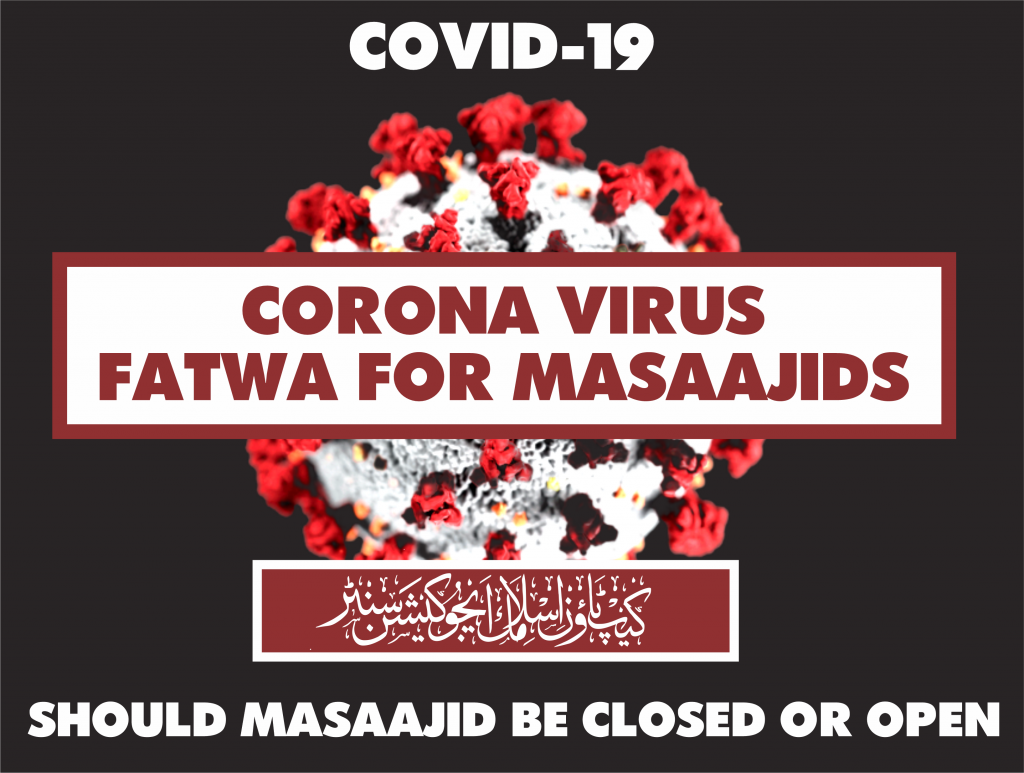 The Corona Virus and Our Duty Regarding Our Masaajid

In the Name of Allah The Entirely Merciful, The Especially Merciful.

By Allah’s Help, The Gifting Master. O Allah Guide To That Which Is True And Precise!

As Muslims living in South Africa, we have a duty Firstly to Almighty Allah in following the teachings of the Glorious Quraan and the Sunnah of the Prophet Muhammad r in regard to the public well-being especially with the Covid-19 pandemic on our doorstep which was declared as a national disaster by the South African President. In addition, this virus is of a contagious nature which has infected thousands and as a result many have died. Countries are even on lock down  trying to contain this disease.

After careful discussions with our religious leaders and health scholars, we have taken the following dictum in the best interest of our Musallies and the broader public. This step in our view is a proactive precautionary step which is in line with the objectives of the Quraan and Sunnah to “Preserve life” and to contribute to the public good, by minimizing the risk of spreading this Covid-19 virus.

Quraan: The Decree of Allah: “And do not contribute to your own destruction” (Quraan 2:195)

“Difficulty must be alleviated”

Our scholars came to the following decision regarding three main areas, which will serve as a temporary measure for our Masaajid in this time of emergency.

Ibn `Abbas t narrated the same as above, but he said, “I did not like you to suffer hardship and to come (to the mosque) covered with mud up to the knees.”).

(Al-Bukhari and Muslim, Chapter to the Call of Prayer)

Points To Be Noted: Rasoolullah  r gave this concession (of performing Salaah at home) to make it easy for the Muslims in bad weather (rainy and muddy) conditions and Ibn ‘Abbas t  followed.

Allah Y says: He has chosen you and has not placed upon you in the religion ANY difficulty. (Quraan: 22:78).

The Covid-19 Virus is a health hazard which is worse than bad weather conditions and it is definitely going to cause harm let alone difficulty, if proactive precautionary measures are not adhered to. It could also be a potential harm to you if you are weak or even contribute to harming others if you are only a carrier of the virus.

Point To Be Noted: Although onions and garlic are Halaal to consume and they are both not Harmful, The Prophet r still forbade them from coming to the Masjid because the smell was offensive. This virus is harmful and we do not know who is infected and who is not. So the large Jama’ah in the Masjid can be limited in hope of protecting ourselves and the larger community which is of utmost importance.

The minimum quota for a Jam’ah is two people as per the directive of the Prophet r when he said: “Two or more people are Jama’ah” (Bukhari)

Point To Be Noted: Salaah in Jama’ah is highly recommended or even compulsory according to some. Nonetheless, Jama’ah can be easily done at home or elsewhere with one friend or family member in order to receive the rewards or to fulfil the obligation accordingly.

Points To Be Noted: Although the prayers in congregation in the Masjid is important under normal circumstances, the Prophet r gave special concession if there is fear or if someone is sick. The congregational prayer can be made at home and you will be rewarded like performing congregational prayer in the Masjid because you are only refraining based on your fear of being infected or due to sickness in which cases the Prophet r allowed you to pray at home.

Point To Be Noted: There is an agreement of the four schools of Fiqh that Jum’ah is NOT obligatory upon someone who fears for their life, honour or wealth.

(Fiqh according to the four schools, chapter on the conditions of Jum’ah, 296)

“The Messenger r said: There is no ‘Adwa (disease that transmits without the will of Allah) … but run away from the leper as you would run away from a lion.” (Al-Bukhari)

Points To Be Noted: Everything only happens with the will of Allah BUT we must take the necessary precautionary measures. One does not wait for a lion to harm him before they react, likewise we must be proactive regarding preventing the spread of this virus and use the maxim: prevention is better than cure. One death is too many for us to then realize.

(Head of CTIEC Ulama Board)

Visit Us or Call Us 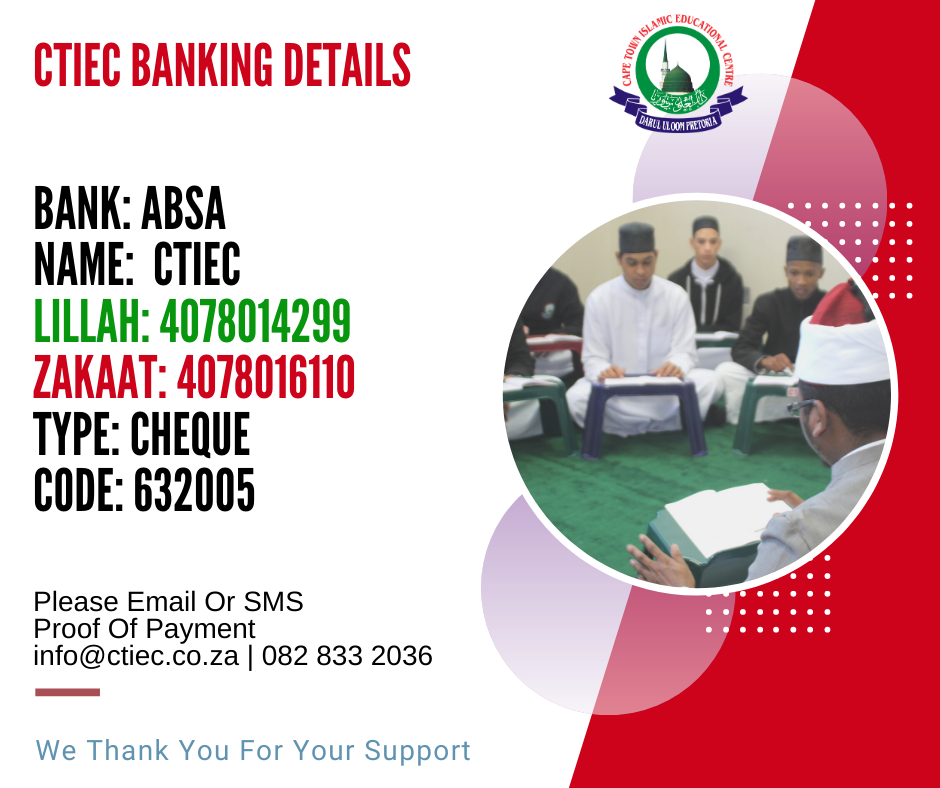